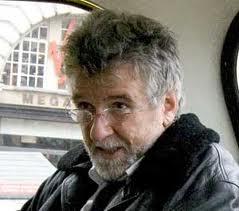 Flynn was born in Farnborough, Kent, and grew up in Scotland. After completing high school in Edinburgh, he studied sociology, philosophy and economics at the London School of Economics (LSE). Among his teachers were John Westergaard, Orlando Patterson and the Marxist sociologist Ralph Miliband.

Following his graduation from the LSE in 1968 (BA Hons Sociology), Flynn embarked on a career in journalism. After a brief period as copy boy in the composing room of 'The Times', he worked as trainee reporter at \Construction News\, then for the \Socialist Worker\ (1972-1978). One of the investigations he conducted under the supervision of Sidney Lenssen, the editor of \Construction News\, led to his first encounter with asbestos, a word and an industry of which Flynn had not previously been aware. In the spring of 1974 he wrote 'Asbestos murders', a series of articles in the \Socialist Worker\ indicting the Scottish lagging industry. A pamphlet version appeared under the title \Asbestos: the dust that kills in the name of profit.

In 1979 Flynn joined World in Action (WIA), Granada Television's current affairs programme. Initially he contributed as a researcher, eventually as senior producer. Flynn won journalistic prizes for the documentaries 'Dust to dust' (an investigation of the scandalous conditions in British and South African-owned asbestos mines in the Northern Cape, 1981) and 'The betrayal of Bhopal' (which uncovered the business malpractices of Union Carbide in India, 1985). The WIA documentary on the Kinross gold mining disaster, 'Death is part of the process' (1986), was selected as the ITV entry for the Montreux Festival.

From 1990 Flynn freelanced for nearly a decade for the BBC, ITV and Channel Four. In 1998 he joined the editorial staff of \The Guardian\ as part of a two person investigation unit, famously exposing the much-garlanded Carlton documentary 'The connection' as a fabrication. For this he received (jointly with Michael Sean Gillard) the Scoop of the Year at the British Press Awards, 1999.

Since 2002 he has been freelancing again. The conclusions of the last project of \The Guardian\ investigation unit prior to his and Gillard's departure appeared in book-form in 2004, under the title 'Untouchables: dirty cops, bent justice and racism in Scotland Yard' (London: Bloomsbury) .

Geoffrey Tweedale was Professor of Business History at Manchester Metropolitan University Business School. He has a long-standing interest in the history of occupational health and has written studies on asbestos-related diseases, byssinosis, silicosis, and cancers in the chemical and cotton industries.

His publications relating specifically to the asbestos industry include:

The collection was given by Flynn in about 2005 to Geoffrey Tweedale who made use of it for his own research, adding some documents. Tweedale donated it to the University of Strathclyde in 2012.

Laurie Flynn's papers on the asbestos industry span the period 1893-2005 and contain information primarily on the occupational health hazards posed by asbestos. This interest is centred on the activities of Cape Asbestos Company Ltd (and all corresponding names including shell entities) as well as the company's overseas subsidiaries.

There are 4 main series:

The focus of the collection is on employer negligence concerning health and safety, as argued in compensation lawsuits brought against the company and its subsidiaries.

Access to the wealth of business and legal papers brought to light primarily through lawsuits led Flynn to question whether multinational enterprises are as progressive as some commentators (notably business historians) have made out. The depositions, affidavits and court exhibits contained in this collection illuminate the role played by corporations and their representatives (in particular company medics and corporate lawyers) in suppressing scientific evidence concerning the risks of asbestos exposure. The Flynn papers also illustrate the lengths to which Cape Asbestos’ legal advisers went to create complex and confusing company structures in order to distance the parent company from liability ("corporate veil").

The collection includes some of Flynn’s notebooks and other background research materials for journalistic projects (among them extensive interviews with South African miners and Glasgow laggers), scripts and transcripts for documentaries, press cuttings, scientific literature, and correspondence with health and safety experts, medical specialists, environmental consultants, tort lawyers and asbestos ban campaigners.

In addition to documenting Flynn’s sustained interest in the workings of multinational asbestos enterprise, the collection also includes a little material relating to gold and diamond mining and the medical impact of atomic testing.

Laurie Flynn's papers on the asbestos industry have been structured geographically in order to reflect original order as closely as possible. There are 4 series-level descriptions, relating in turn to South Africa, North America and the United Kingdom, followed by a small series of Cape Asbestos corporate material. The catalogue closes with a single item, Flynn’s original listing of his files on Cape Asbestos, c. 2004.

There are limits to the geographical logic. The series 'Mining in South Africa' includes a number of depositions from lawsuits pursued in American and British jurisdictions, yet by South African plaintiffs or containing information Flynn considered pertinent to their cause. Our catalogue thus preserves Flynn's suggestion that earlier depositions from quite other parts of the globe mattered specifically to South African lawsuits against the international asbestos industry.

Overall Flynn’s aggregations have been left undisturbed, except where there was exact duplication of content. Where duplicates were removed, the scope note contains a cross reference to the extant copy.

Prior to coming to the University of Strathclyde, Laurie Flynn's papers on the asbestos industry were used by Geoffrey Tweedale for his own research. As a result, it is not always certain whether an item was added to the collection by Flynn or later by Tweedale. In order to allow future users of the collection to pursue such questions, all container inscriptions have been added to the archival history for each item. Prior to rehousing, the original containers were scanned to ensure against accidental loss of contextual information.

Part of one file is restricted in compliance with the UK General Data Protection Regulation and the Data Protection Act 1998 and for posthumous medical confidentiality. Otherwise no access restrictions.

As of 4 May 2015, copyright in the material is still with creator.

Predominantly paper. In order to access the (few) microfiche components, a microfiche reader needs to be used.