Narrow your results by:

Laurie Flynn's papers on the asbestos industry span the period 1893-2005 and contain information primarily on the occupational health hazards posed by asbestos. This interest is centred on the activities of Cape Asbestos Company Ltd (and all corresponding names including shell entities) as well as the company's overseas subsidiaries.

There are 4 main series:

The focus of the collection is on employer negligence concerning health and safety, as argued in compensation lawsuits brought against the company and its subsidiaries.

Access to the wealth of business and legal papers brought to light primarily through lawsuits led Flynn to question whether multinational enterprises are as progressive as some commentators (notably business historians) have made out. The depositions, affidavits and court exhibits contained in this collection illuminate the role played by corporations and their representatives (in particular company medics and corporate lawyers) in suppressing scientific evidence concerning the risks of asbestos exposure. The Flynn papers also illustrate the lengths to which Cape Asbestos’ legal advisers went to create complex and confusing company structures in order to distance the parent company from liability ("corporate veil").

The collection includes some of Flynn’s notebooks and other background research materials for journalistic projects (among them extensive interviews with South African miners and Glasgow laggers), scripts and transcripts for documentaries, press cuttings, scientific literature, and correspondence with health and safety experts, medical specialists, environmental consultants, tort lawyers and asbestos ban campaigners.

In addition to documenting Flynn’s sustained interest in the workings of multinational asbestos enterprise, the collection also includes a little material relating to gold and diamond mining and the medical impact of atomic testing. 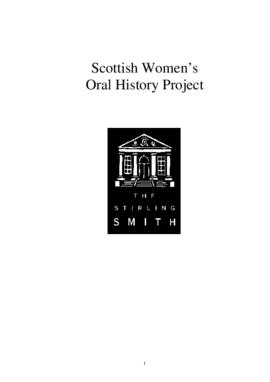 The Scottish Women's Oral History Project was undertaken in Stirling, Scotland, between 1987 and 1990. The aim of the project was to record the lives of women in Scotland in the first half of the 20th century, including a specific objective to record the experiences of working-class women.

The project was established in December 1986 by the Women’s Committee of Stirling District Council. The impetus for the project was part of a wider promotion of women's interests, as well as a need to address a perceived lack of women's voices in the historical record. Sponsored by the Manpower Services Commission (MSC), the project set out to record the personal testimonies of local women living in the Stirlingshire area of Scotland about their life in the decades before the Second World War. Based in Spittal Street, Stirling, the project was coordinated by Jayne Stephenson, who, with a team of fellow interviewers, interviewed around 80 local women, between 1987 and 1990.

The testimonies cover all aspects of women’s experiences, from childhood to adulthood, through to the Second World War. The interviews are loosely structured into sections covering childhood, leisure, work, marriage, children, community and social class (the interview questions are based on the model questionnaire devised by Paul Thompson (1978)). The project explicitly aimed to cover a representative sample of female occupations, and the material contains recollections of a wide variety of occupational experience - including textile workers, waitresses and hotel staff, domestic servants, factory workers, teachers, nurses.

The publication contains written transcripts of 77 interviews (anonymised), together with an index and an introduction by Callum Brown.

Temporally, the material relates to women born in Scotland between 1894 and 1926, and the interviews cover the period up to World War II.

Geographically, the material covers the Stirlingshire and 'central belt' area of lowland Scotland, including extensive material on life in Glasgow and Edinburgh.