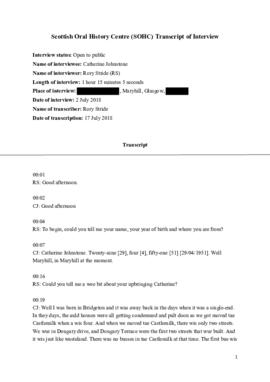 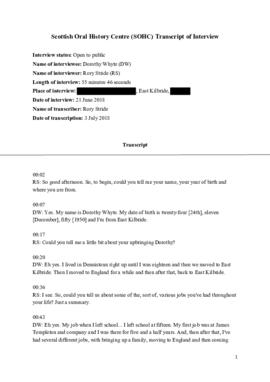 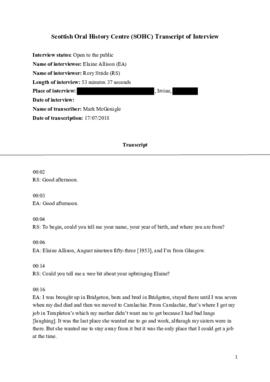 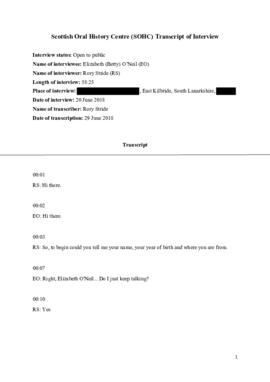 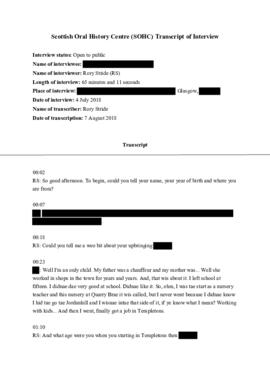 The Scottish Oral History Centre (SOHC) was set up within the Department of History at the University of Strathclyde in 1995. Since its foundation the SOHC has been involved in a wide range of teaching, research and outreach activities designed primarily to encourage the use of ‘best practice’ oral history methodology in Scotland. Until 2005, the SOHC was directed by Professor Callum Brown, since then by Professor Arthur McIvor.

Rory Stride was a student at the University of Strathclyde. In 2016, he completed a BA thesis called ‘“Proud to be a Clyde shipbuilder. Clyde built”: The Changing Work Identity of Govan’s Shipbuilders, c.1960-Present.’ In 2018, he completed an MSC thesis called ‘Gender, Work and Deindustrialisation: Women’s Experiences of Work and Closure at James Templeton & Co., Glasgow, c.1960-1981’.

Oral history project, conducted in May - September 2018 by Rory Stride, with women formerly employed at James Templeton & Co., carpet manufacturers, between c. 1960 and 1981. A total of six women were interviewed. The interviews last approximately between 45 minutes and 1 hour 15 minutes and were conducted at a variety of places across Scotland. The interview questions were semi-structured and largely directed by the responses of the participants.

The interviews focus on the women’s working lives and their first experiences of employment after secondary school but specifically exploring their experience of work at James Templeton & Co., the preeminent carpet manufacturers in Glasgow during the 1960s and 1970s. The company had seven factories, located in the east end and southside of Glasgow with the company’s Crown Street factory being the last to close in early 1981 when Templeton Carpets amalgamated with Stoddard Carpets. Topics discussed include trade unions, working conditions, gender divisions in labour, staff camaraderie, management and staff relationships, and periods of redundancy, unemployment and re-employment after leaving James Templeton & Co. The interviews also cover the women's feelings and opinions regarding the gentrification and redevelopment of the former headquarters and factory of James Templeton & Co. located at Templeton Street on the north eastern edge of Glasgow Green.

Access to one interview is restricted to anonymised versions of the interview recording and transcript, in order to comply with the wishes of the participant. No other access restrictions.

Copyright: University of Strathclyde.
Please contact repository for permission to reproduce these interviews.

This collection is part of the Scottish Oral History Centre Archive.